The Golden State Warriors may be one of the few teams in sports to benefit from a West Coast bias. They’ve been showered with adulation since they took San Antonio to six games during the 2013 playoffs. Yet, they’ve been largely ignored by the national media for much of this season.

They should consider themselves fortunate. There haven't been too many positives to report.

The Warriors were thought to have mirrored Indiana’s rise in the East with a West Coast swag of their own and challenge Oklahoma City in the youth department. Unlike Indiana, the Warriors offense is a thrill a minute.

Andre Iguodala's acquisition represented Golden State’s attempt to install their own athletic, pinpoint shooter from the point-forward position with the chops to defend anyone on the floor. Essentially, Paul George-lite. However, it’s illogical to expect him to have the same impact as George in Indiana or turn-of-the-century Pippen did in Portland, as some have suggested he would.

Considered title contenders before the season began, they’ve succinctly slid to 13-12 and ninth in the Western Conference standings. Will they be window shopping outside the top eight seeds in February and March?

I doubt it. However, there are signs that these Warriors aren’t battle ready in the Western Conference as currently constructed.

If you brought into the hallucinations of a trip to the Finals, this is your shock treatment and a return to reality.

Stephen Curry and Klay Thompson are still shooting the nets off of rims, but anybody can talk about what’s gone right for the Warriors. Besides Harrison Barnes, their bench is firing bricks and rotten tomatoes.

Iguodala has missed a dozen games, but the Warriors began submarining well before his injury.

On Sunday night, a tilt with the Phoenix Rising Suns resulted in Thompson and Curry getting burned by the combo of Eric Bledsoe and Goran Dragic.

There’s also the truth about Curry that won’t be uttered around the league. For all of his natural offensive talent, he doesn’t grind on the other end of the floor where Curry is either comparable to a toll gate or a slothful traffic cop guarding a donut shop. 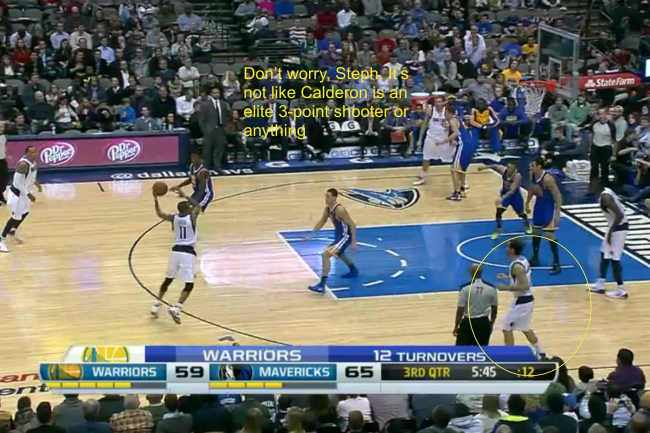 The problem with being the NBA’s top three-point shooting team is that they have a tendency to go on on streaks of the hot and cold variety.

More frightening is the thought that these Warriors could be the contemporary Steve Nash Suns with Iguodala playing the role of Shawn Marion. The past two decades of Golden State’s past is riddled with young teams with a high entertainment factor and limit ed potential who couldn’t capitalize by making the leap into contention status.

Could this be a slight overreaction? Sure. That’s possible. However, there have been questions about their viability as a contender since the preseason, and they’ve done nothing but give credence to those concerns.

Their frontcourt is solid in a plethora of areas, but they aren't spectacular in any regard. Andrew Bogut is serviceable on the offensive end, but he’s not a go-to scorer in the post. Neither is David Lee.

It’s not too late for Mark Jackson to turn this thing around.

The Knicks and Nets on the East coast have taken some of the heat off of Golden State, but pretty soon the sharks will begin circling when they begin noticing that the Golden State Warriors’ are on course to crash into the Bay Area rocks.