Johnny Manziel's half-game suspension against the Rice Owls looked dubious from the jump, though the 28-point underdogs fought hard for a first quarter lead, appearing more like the SEC title condenters early on in the game.

Of course, it didn't last. It didn't stand a chance of lasting. Once Johnny Football ran back onto the field, the Aggies had the momentum and the spotlight firmly in their grasp. Manziel jetted for a first down on his first play, scrambling for 12 yards, eventually setting up a field goal for Taylor Bertolet three plays later. On his fourth play of the next drive, following Rice's second interception of the half, Manziel threw a 23-yard touchdown to Mike Evans. Then the Heisman Trophy winner let everyone know how he felt about it, as he did several times last season. 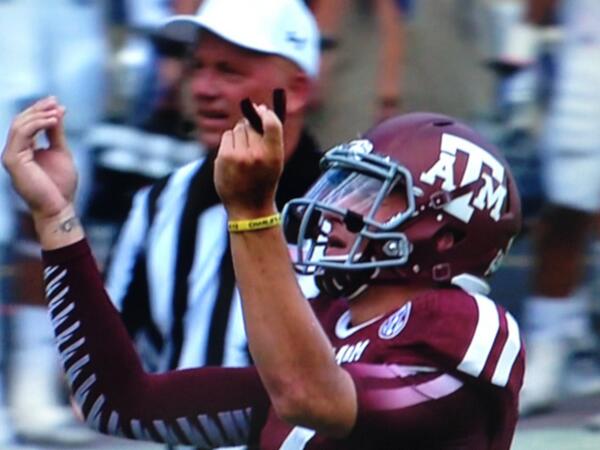 Money Manziel, indeed. His trash-talking was on point, too, appearing to offer one of Rice's poor defenders an autograph during the second half.

So, after surrendering 28 points in the first half to Rice, Texas A&M got their swagger back and cruised to a 53-31 victory, but the Aggies will be far from pleased by the performance. A win is a win; the Aggies, however, looked flat on both sides of the ball for their home opener until their knight in tarnished armor showed up and saved the day. He finished with 94 yards and three scores in eight attempts, as well as a 15-yard unsportsmanlike conduct penalty for talking trash to Rice players after his third touchdown. The latter got him benched by coach Kevin Sumlin late in the fourth (finally, a punishment that might teach him something).

Apparently this comes with the new territory.

Part of the reason the Aggies looked lethargic in the first half was likely because they had two defensive backs — juniors Deshazor Everett (who later became the first victim of the NCAA's new targeting rule and was kicked out of the game in the fourth quarter) and Floyd Raven Sr — also suspended until halftime. Senior defensive lineman Kirby Ennis missed the entire game thanks to suspension. So the first half against Rice might be completely meaningless, except that the Aggies clearly have some NCAA-related issues, as well as a leader veering the team towards an "F U" mentality.

That can be a good thing and a bad thing, depending on the maturity of the team. Manziel picking up a flag for talking trash to Rice is pretty weak, and you can guarantee Alabama and LSU both took notice.

Either way, the Aggies' defense and mental fortitude, will have to improve over the course of a long SEC schedule that gets cracking against the Tide on September 14th, the first game they'll have their entire defense on the field following suspensions. A&M's offense will have to diversify. Now that the cat (and the money) is out of the bag, Manziel has a huge target on his back. Those extra long plays he worked for touchdowns will all of a sudden get a lot shorter.

And against Alabama and LSU, he won't be playing anyone who wants, or needs, his autograph.